The study by the state Transportation Department and New Jersey Transit, will consider viability of the system, projected traffic-congestion relief, and possible route options.

"There is no doubt that New Jersey needs to examine carefully every possibility for enhancing our current rapid transit systems and alleviating congestion on our roads," said Deputy Assembly Speaker John S. Wisniewski, who sponsored the legislation.

Engineer Live! — Taxi 2000's SkyWeb Express is "a system of small vehicles that strikes a balance for the commuter... because each conveyance can be individually directed, the system comes close to a door-to-door service." 8-1-2004

"We should be ready to do it"

U of Minnesota students work on PRT plan

From Canada: The Future Hails a Cab

PRT proposal in Monterey, CA area 12-11-2003
The group Sustainable Monterey Bay has proposed a Personal Rapid Transit system for the Fort Ord area north of the city of Monterey, California.  The fort has been decommissioned by the military, and the site-- which borders the town of Marina and the campus of California State University's Monterey Bay campus-- is to be redeveloped into five "village" communities.

Ted Lahti of SMB's Soltrain says his group is working with the three master developers in charge of the redevelopment, he reports all seem to be receptive to the PRT concept.

Soltrain is a proposal to design and build a solar powered "ultra-light rail" line in the Monterey Bay area; the intention is that the additional PRT system would run on solar power as well.  It is envisioned that a combination Soltrain-SolarPRT system  will solve congestion and pollution problems in the Fort Ord area, as well as save energy.

At this time Lahti indicates his group likes Taxi 2000 Corporation's Skyweb Express PRT, but that they are open to learning about other PRT systems as well.

November 5, 2003- On January 1, 2004, Taxi 2000 will begin its Phase 2 prototype program to build a working, full-scale, outdoor demonstration of SkyWeb Express. A substantial investment was recently received, and the company has sufficient funding for all of stage one and some of stage 2 of the four-stage Phase 2 program.
According to founder and inventor Dr. Ed Anderson, "This is a great day for us, a great day for transportation, and a great day for the planet. In 30 months we can have a working demonstration model of our system. If any customers want to plan in parallel with our Phase 2, the first SkyWeb Express system could be operating in four years." Taxi 2000 Corporation Newsletter  - Vol. 2 No. 6

Nov. 1, 2003- This has been a great week for us.  After a two-day visit, an out-of-state investor wrote a check for $200,000 and pledged an additional $1,800,000. Thus, as you might say, we are underway!  Also, this week we had a two-hour visit from the Minnesota DOT Commissioner, which resulted in specific action items.  Next week we will be visited by the Minnesota Governor's transportation aid, and on the same day by a high-level staff person assigned to work with us by the Minneapolis City Council.  Later in November, the Minnesota Transportation Alliance has planned to hold its monthly meeting at our facility, and staff from Metro Transit have booked to visit us.  Things are looking up very much in Duluth where a high-level committee, with representatives from all of the important governmental bodies as well as investors, has been meeting and is poised to invite us to meet with them soon.  In New Jersey, our affiliate MidAtlantic SkyWeb has developed a detailed plan to start with a system in Longbranch.  Several other excellent opportunities for investment have showed up.

Libertarian blog gets on board with Skyweb 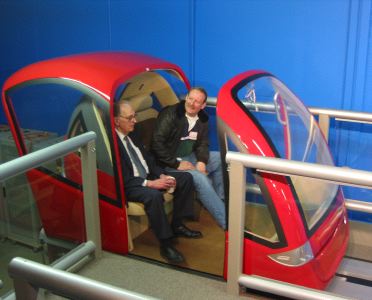 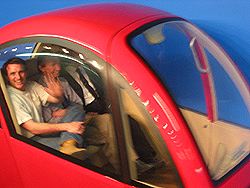 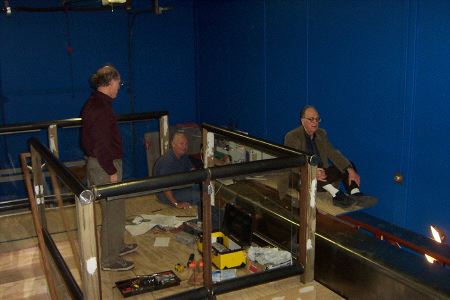 Ed Anderson takes the first 'ride', on a temporary platform attached to the top of the chassis. "The motion was smooth and eerily silent," he reported. Note the guideway is now enclosed by metal covers. Taxi 2000 Corp. photo

Ed Anderson takes the first 'ride', on a temporary platform attached to the top of the chassis. "The motion was smooth and eerily silent," he reported. Note the guideway is now enclosed by metal covers. Taxi 2000 Corp. photo 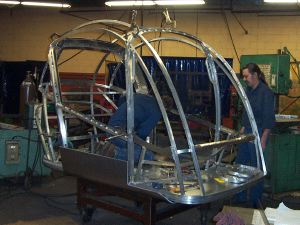 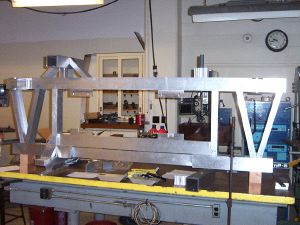 Chassis design is shaping up as nearly identical to '80s model (below). Taxi 2000 Corp. photo

Chassis design is shaping up as nearly identical to '80s model (below). Taxi 2000 Corp. photo 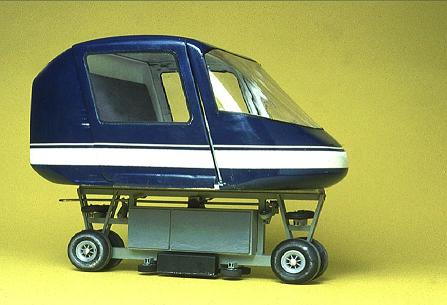 Readiness The software works, and the vehicles could go FAST. Includes comments about the problems with Raytheon's version of PRT