The Tri Delta Transit board unanimously supports feasibility study of 'Dynamic Personal Micro Transit' (PRT) for eastern Contra Costa County, partnering with Glydways. The five-segment route is a series of corridors and is likely to prioritize a role for PRT of a feeder for the BART system rather than local transit, for which a network configuration would be an advantage. 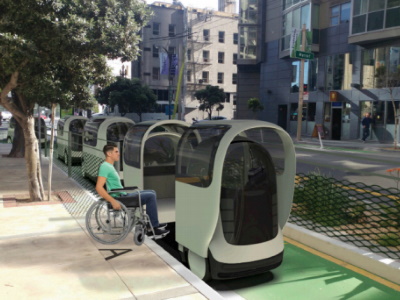 • Antioch joins Pittsburg, Brentwood, Oakley, and 2 transit agencies in support for "micro transit network" planning 5-12-2021
• Glydways on display 9-14-2021
An exhibit by the Bay Area firm took place 9/14 at San Jose City Hall; $40 million in investor funding is reported to have been raised.
Link 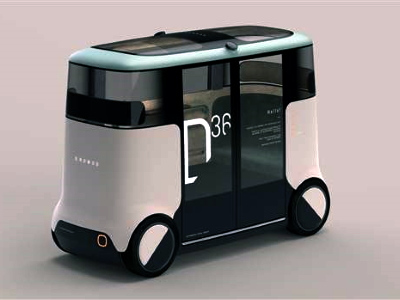 Pods for India's new Film City 2-17-2021 (REVISED 7-15-2021)
Yamuna Expressway Industrial Development Authority (YEIDA) has decided pod taxis will serve two planned mega projects in Noida (near New Delhi): a new Jewar International Airport and a 1,000-acre "Film City" studio facility. Both will be served by a 35 km express metro line; the pod elements are quoted at a cost of $8.2M per kilometer, a total of $41.2M. 7/15/21: The Film City element has been misidentified in Indian media as the longstanding Noida Film City on Dadri Main Rd in Sector 16A (see Project Thumbnail, below). This is more than 50km from the new airport site. Instead, the NewsCenter has identified a parcel at 28.2512697 N, 77.5695933 E to be the correct site, a new Film City planned by the YEIDA development authority, located near the airport site at 28.158333 N, 77.633333 E. (See YEIDA graphic: below.)

• See also MoU for Ultra PRT project, 6-13-2014
• This study set out to study a connection of 70 km (43.5 mi). 9-4-2020
• New Driverless Pod Taxis to Operate From Greater Noida to Noida International Airport 3-2-2021
Pod taxis planned for Noida described as connecting northern and southern areas of the national capital region to the new "greenfield" (previously undeveloped land) airport in Jewar.
Readers should note that the official rationale depicting pods as "a revolutionary mode of transport widely being used in many western countries" is not true. Morgantown, Heathrow, and Masdar are not "many western countries." If this is put forward as a way to assert PRT is not an 'unproven technology,' it is an approach which bears watching.
• "To bridge this gap, pod taxis are being considered." 3-2-2021
• PRT only a possibility, not a done deal, in this article. 3-7-2021
• Is pod taxi viable for airport link? 3-21-2021 Development authority gives consultant 30 days to determine feasibility. 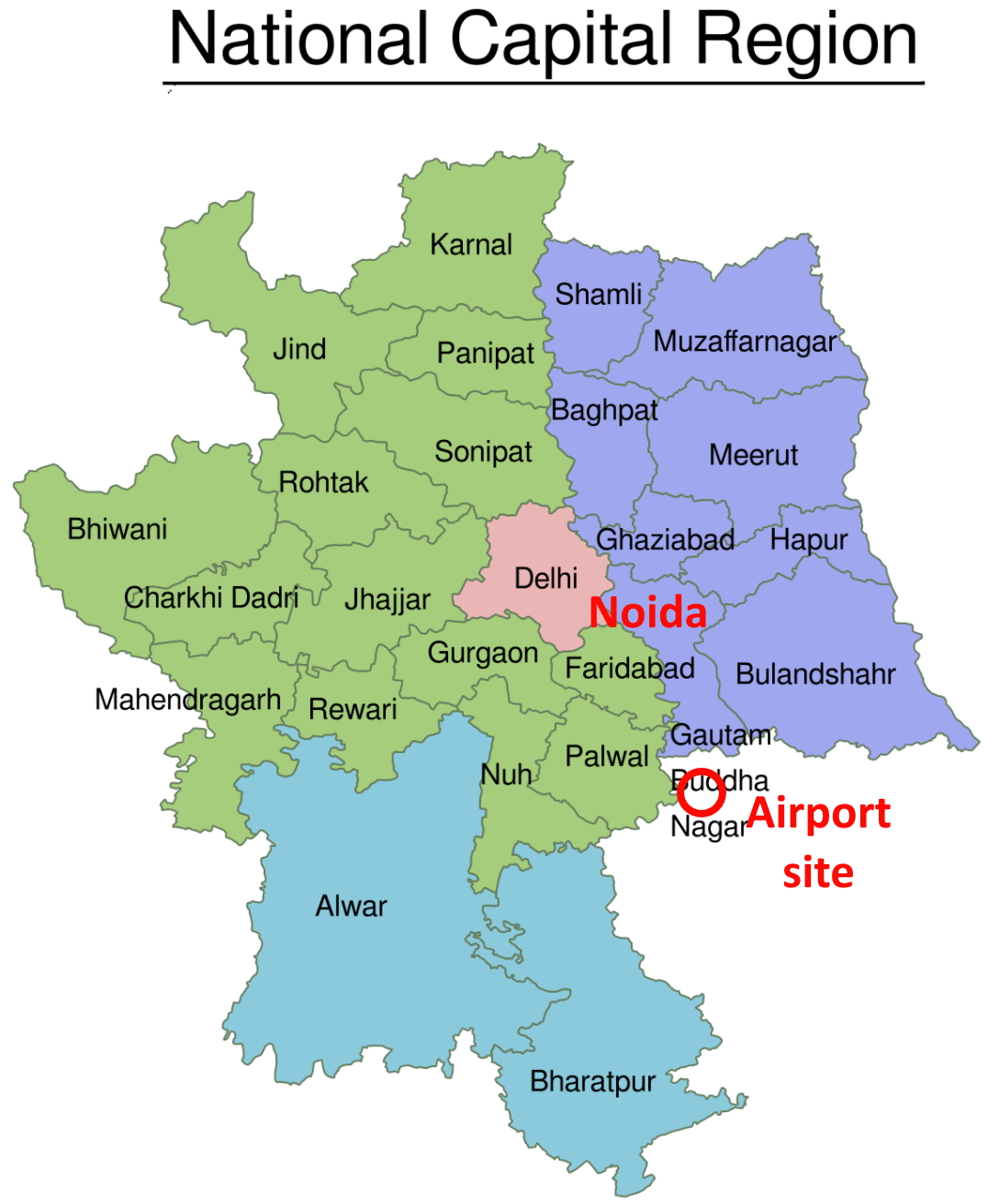 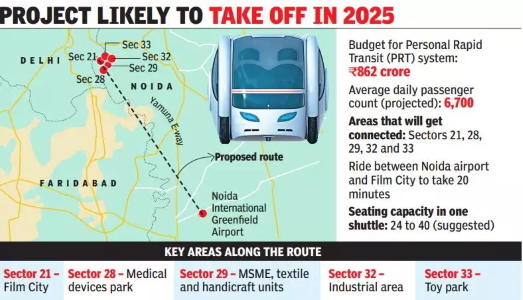 Project Thumbnail. Upper end of dashed line incorrectly placed at old Film City in Noida, more than 50km from planned airport site. Correct locations of Sectors 21, 28, 29, 32, and 33 can be seen in Master Plan map section below. -Times of India

Project thumbnail. Upper end of dashed line incorrectly placed at old Film City in Noida, more than 50km from planned airport site. Correct locations of Sectors 21, 28, 29, 32, and 33 can be seen in Master Plan map section below. -Times of India 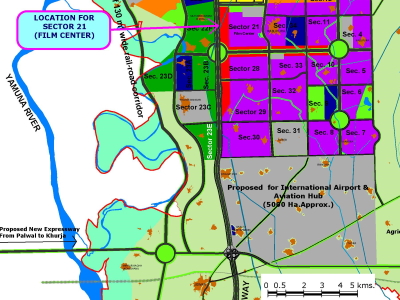 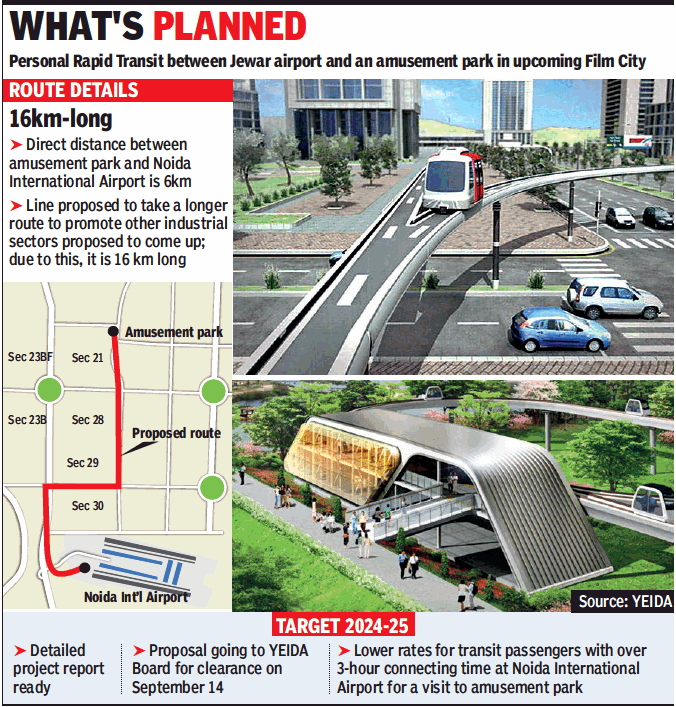 Times of India graphic 9-7-21
• Film City layout to change 9-15-2021
YEIDA decides 220 acre commercial development zone will instead be part of new Film City, and to revise the detailed pod taxi project plan which had been expected 9/14. Whether the 2 developments are related is not clear.

Vuba, new US-Rwanda pod entrant 2-8-2021
A new personal rapid transit company was announced Feb. 4 in an email from co-founder Peter Muller (PRT Consulting, ATRA). Called Vuba ('quickly' in the Kinyarwanda language), the company bills itself as a "Smart City" mobility company, with plans to use solar-powered driverless suspended vehicles on elevated guideways to provide nonstop origin to destination travel.
The development team comprises East Africans and Americans including co-founder Muller and founder Paul Klahn. In a brief email exchange, Mueller described Vuba as being designed in response to poor bus service and growing traffic congestion.
Vuba lists offices in Colorado Springs and Kigali. The company will license an existing control system, but needs $20-30 million for development. The system will be based on as yet undisclosed proprietary designs for a switch and non-truss guideway. Muller says the Vuba switch has no bumps through the switch, no speed limit, and all wheels are supported all the way through the switch. ©2021 PRT NewsCenter 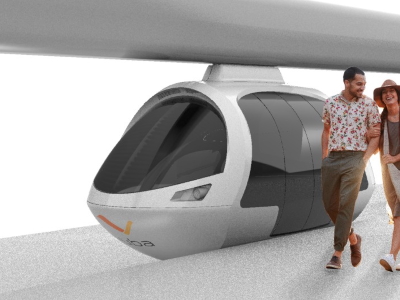 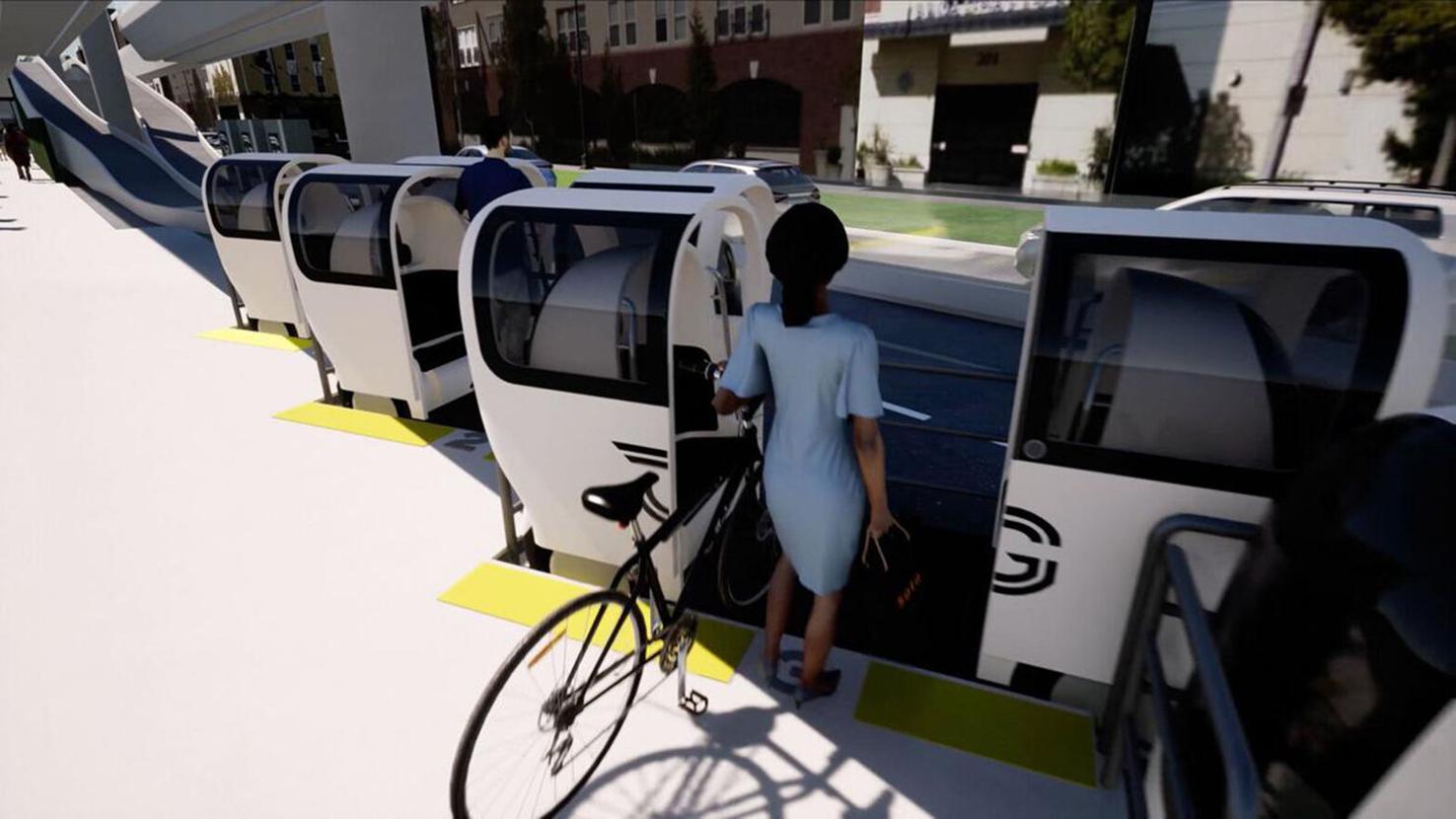 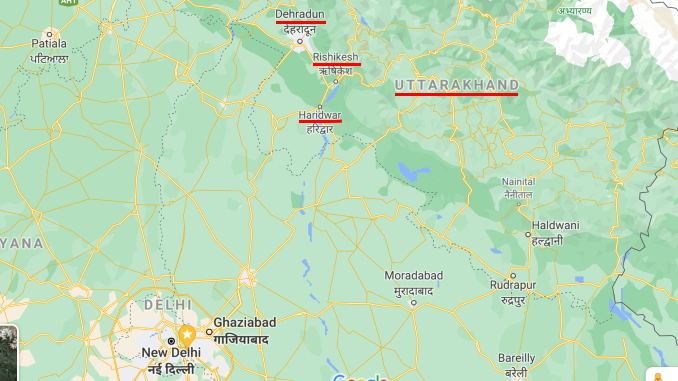 Uttarakhand and the 3 cities 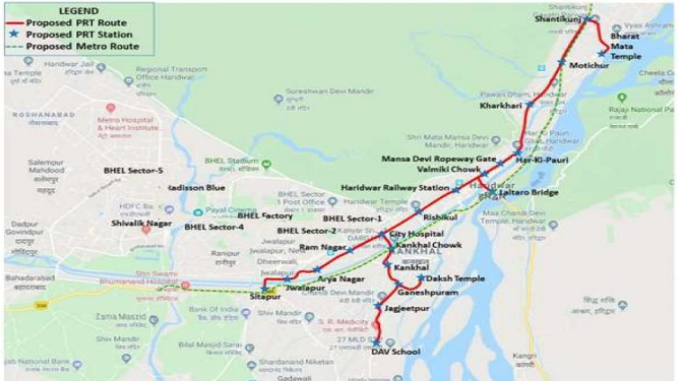 • Just one bidder 4-6-2021
PNC Infratech Ltd submits the sole Expression of Interest to develop PRT system on a Design-Build-Finance-Operate-Transfer basis. The company has experience since 1999 in construction of highways, bridges, runways, and power transmission lines.
• Re-bid 4-24-2021
Requirement of already-in-operation technology of at least 1.5 km in length limits bidders to using Ultra (Heathrow, 3.9 km) and 2gethere (Masdar, 1.7 km).
• The Metro Rail Guy doesn't think PRT has urban utility (of course). 4-6-2021
Link

RTC says No to Trail and Pod Cars (Santa Cruz). Commission will not study Pod Cars for rail-trail, even a high-level analysis. 6-4-2020 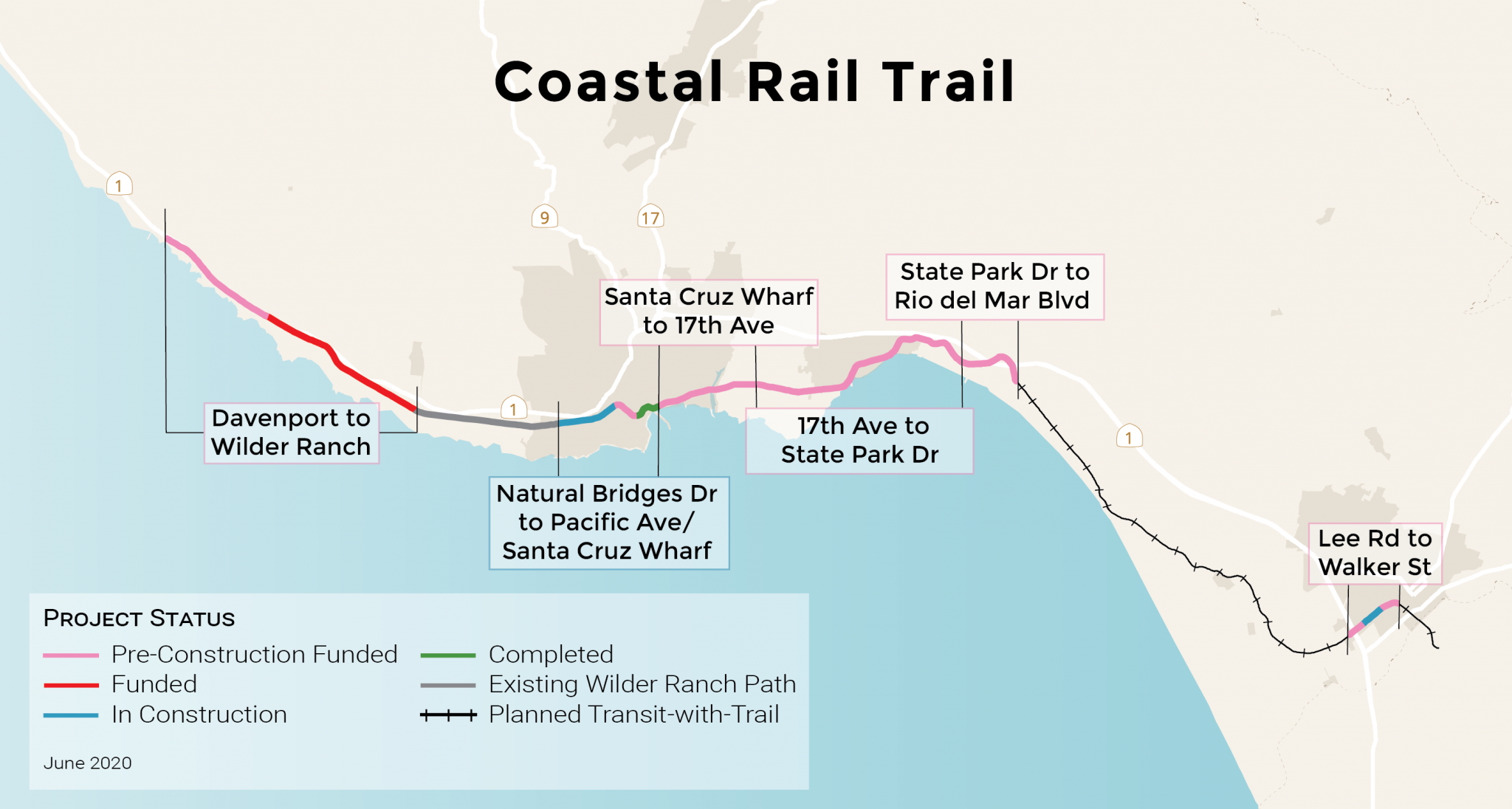