No Mo: "Monorail campaign stalling? Even named backers not along for ride" Failed to gain any momentum; group hoped to plan 16 mile route and downtown PRT loop outside of regional planning structure. Cites Vectus in Korea as example of PRT. 10-21-2014
• Monorail ballot measure loses huge, Yes 20%, No 80%. 11-5-2014


Where's Vectus' web presence? 7-25-2014
The websites for POSCO's PRT company and the Suncheon project have expired:
• vectusprt.com
• suncheonprt.com
"Vectus" not mentioned in official press release announcing opening of Suncheon system.
• Restored as of 2015 3-13-2015 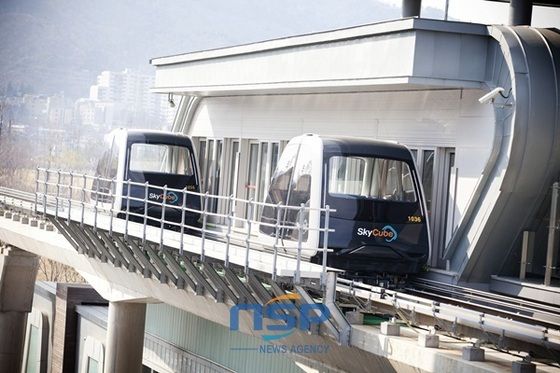 In a story by the South Korea broadcaster MBC reported in May, the Jeollanam-do (South Jeolla) provincial government announced that the Board of Audit and Inspection (BAI) had completed a review of how POSCO, maker of the Vectus PRT system, was chosen in 2009 as Suncheon's main partner on the personal rapid transit project. The review found that the four civil servants leading the project for the municipality violated procedures when they selected POSCO without a public selection process. They then staged an 'open' selection process as a coverup. [Transcript]

The BAI is South Korea's administrative oversight agency. BAI decides what projects it will audit and generally acts on information from whistleblowers, though it is not known if there was a whistleblower in this case. What is probable is that BAI reviewed the PRT project because it is very high profile, and reportedly is the biggest-budget project ever undertaken by the city of Suncheon.

The BAI did not respond to a request from NewsCenter seeking information.

The BAI found the four civil servants violated procedures in giving the design-build-operate contract to POSCO. Three were to be given official warnings, one was to receive a reprimand.

The four unnamed civil servants are: In the story, "Silence on PRT civil service discipline controversy," MBC reported the disciplinary penalties are controversial among city employees. Some say even though rules were violated, much was accomplished and the project is considered successful.

Others say the penalties will make civil servants less open to taking risks. An unidentified city employee interviewed by MBC explained that officials could "avoid risk in order to avoid reprimands in the future."

POSCO/Vectus is doing business at Suncheon as Ecotrans Ltd. The PRT constructed by the project is a transit shuttle between the Suncheon International Garden Expo and the environmentally sensitive Suncheon Bay wetlands. The system is operating, and the vehicle fleet is gradually coming on line.

NewsCenter contacted Wooje Kim, Managing Director of Vectus' Korea branch. He stated that KRW65 billion ($59.5 million) had been spent on the project. Kim denied POSCO was at fault for the phony selection process, and that the BAI review was only an internal government audit. However Kim claimed the review delayed the project's completion.

On August 14 the Yonhap news agency reported Garden Expo organizers said the delay was "due mainly to problems in securing parts".

Yonhap also related statements that project funding was private. However the project is design-build-operate-transfer, meaning the city will receive ownership of the PRT after 30 years.

BAI's finding of wrongdoing makes sense to one PRT industry insider, who spoke to NewsCenter on condition of anonymity. "The first we heard about the selection of POSCO was when the project was announced," he said. But he thinks POSCO could have prevailed in an open and honest competition. Given the 5 kilometer long route and ridership levels, use of a power rail, and its higher top speed, Vectus has an advantage over battery powered pod systems like Ultra and 2getthere. Furthermore, selection criteria usually disqualify vendors that don't yet have test tracks and safety certification.

Daehan Won of Industrial and Systems Engineering, University of Washington, provided research and translation on this article.

* There are nine grades in the South Korea civil service system, with Grade 9 the lowest.
Close Story 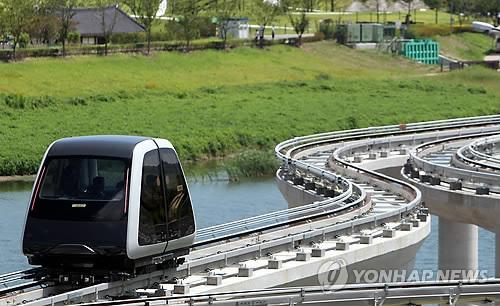 
First video from Suncheon of trip in a Vectus PRT pod. Lots of footage of guideway, approach to stations and depot. Pod itself not visible; way to show off that Pinanfarina styling, guys! 6-4-013

©MMXIII Get On Board!PRT NewsCenter Link

"In a matter of only a few weeks, the first passenger vehicles will be rolling out across the Suncheon landscape in time for the opening of the International Garden Expo in April."

Yet the expo's April 20 opening came and went with no news about the new Vectus PRT system. Not in television news video of the expo, not in press releases from Vectus, and --most telling -- not in Twitter or Facebook updates by people riding the Pinanfarina-styled pods, or in their photos on Instagram, Flickr and Picasa, or on YouTube.
And it's because the Vectus PRT system was not ready for the International Garden Expo opening.
NewsCenter has learned the missed deadline was explained in a presentation at the International Conference on Automated People Movers, the ASCE event which concluded yesterday in Phoenix.
Sources say that while the guideway and stations are indeed ready, the vehicles have not received certification. Pods will be put on the guideway as each is certified, but reportedly there will not be enough to provide full service until fall.
While the wetlands visitor center is a permanent facility, the International Garden Expo 'main event' is scheduled to close October 20.
Given the years of testing Vectus has engaged in at its facility in Uppsala, Sweden, this delay is disappointing.
After the way Vectus created expectations of an on-time opening at Suncheon, they undermined themselves by not altering those expectations. The company needs to consider a new media relations strategy.

Vectus statement on delay, via Peter Muller of PRT Consulting:
"It has been decided not rush the system into full commercial operation this month simply to coincide with the International garden Expo - which was a convenient deadline to work to when the project first started. There has simply not been enough time to build and test all the vehicles given the fact that the new vehicles are really very different, in terms of technical sophistication, from the ones at the test track. We are currently running in Suncheon with two vehicles at the moment and shall be incrementally increasing the fleet, and operational headways, on a monthly basis as various test programmes are completed. It is now expected that the full system will be open to the public sometime this fall."

View maps of the various zones at the International Garden Expo 4-5-2013
• Interpretive page for the 'PRT Square' public space located in the Wetland Zone. The Expo opens April 20, 2013. 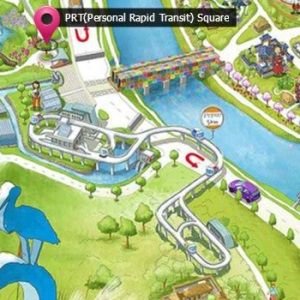 
Suncheon construction almost done (PDF): Vectus PRT Update (Oct. 2012). 11-7-2012
Work on depot, stations and guideway "nearing completion" just outside this city in South Korea. Eight photos; the final picture of concrete guideway appears quite wide because it holds track for travel in both directions.* There are 2 stations with in-line berths. 40 pods are planned.

• (11/16) Martin Pemberton, Vectus director of Sales & Marketing, confirms for NewsCenter that the Suncheon stations are offline: "Maybe some confusion in terminology. By 'in-line' we mean [vehicles park] one behind the other. The stations are 'off-line' from the main track, ie. in siding as you call them."


Vectus official tips business plan: "We believe there is a huge future for PRT in emerging economies where there is little existing infrastructure and an urgent requirement to install low cost, energy efficient transport systems on a countryside basis." 7-26-2012


UK Tram, a British rail industry group, has issued How To guidances on developing PRT projects 7-20-2012


Access for all: Universal design blogger reviews Vectus PRT with eye to improving transit for people with disabilities. 7-12-2012 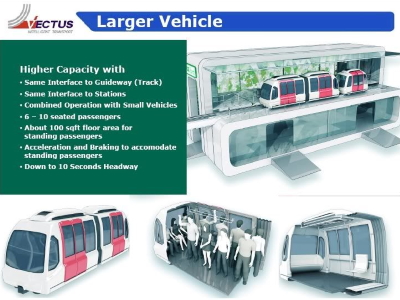 
Coverage of visit by Members of Riksdag (Swedish Parliament), March 26, 2009


"Can get car-free city with høybane" (Tønsberg, Norway)