UrbanLoop originated in 2017 as a project of the University of Lorraine, involving 100 students, two departments (the National School of Electricity and Mechanics and National School of Mines), 4 universities, the National Center for Scientific Research, and the Grand Est region including the city of Nancy. Construction of a 200m demonstration system began in 2019 at the Institute of Applied Sciences-Brabois Engineering campus; testing was conducted there in 2020. A photo caption to a Feb 12, 2021 article may mean an UrbanLoop system would not be a unified network, requiring transfers--this may not be a problem only in countries such as France which are used to riding metros. However other descriptions speak of capsules being able to access any stations in their network. 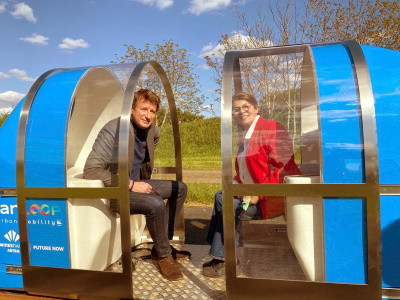