• The PRT decade, Part II. An Ultra system is planned for new Chengdu Tianfu airport, to be #2 airport in China. 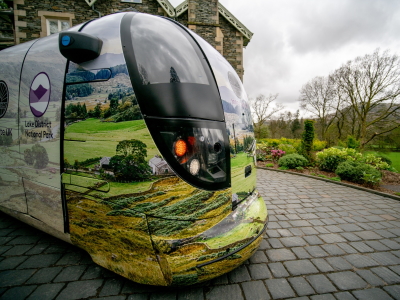 Could taxes on automated technologies such as the Heathrow self-driving pods discourage green vehicles? 2-23-2018

Cardiff, Wales, was to be the site of the first Ultra network. Now city councillor Michael Michael (Labor) wants to examine the technology again. Includes video of Ultra road testing underway in Greenwich in London. 4-5-2017 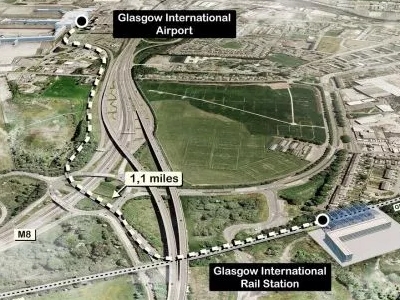 "Fairwood Group today said it has teamed up with Ultra PRT of the UK to provide next generation technology-enabled urban mobility systems in India." Which is strange, since Fairwood and Ultra have been working together for at least five years. 8-26-2016

BBC: "London's first driverless cars revealed" 1-28-2016
...and it's Ultra, modified for street use. The test will take place in the Greenwich Peninsula area (site of O2 Arena) starting in July, as part of Gateway -- 'Greenwich Automated Transport Environment.' The report makes it clear that while the Heathrow Pod's look is familiar (and perhaps comforting choice of "the design we have now"), all-new software, navigation and sensors will be used.
•ABC News bulletin 1-29-2016
•Video: Slo-mo test run 5-13-2016

• ABJ Poll - Are pods a good idea?
#149; Barnes to comment on plan "next week" 8-14-2015
• Turns heads at city hall 8-17-2015
• Statesman poll 8-17-2015 At 3 days, plurality say PRT "could be an effective solution". Things to note in Comments on the poll: 1) They're not understanding advantage of high average speed (combined with nonstop travel) over top speed; 2) they're not understanding the concept of aggregate capacity of the network; 3) they're not understanding that 'personal' and 'point to point' MEAN 'nonstop from station to station of your choice' - whether it's 3 stations at Heathrow or dozens of stations in an urban application; 4) they're expecting pods to be good at short urban trips AND longer commuting, whereas the future would still be multimodal.
• Is Austin ready? 8-18-2015
Austin source tells the NewsCenter the Garriott-Barnes proposal is "fragile but possible"; earlier Garriott pitch ended due to global recession drying up available funds. 8-20-2015 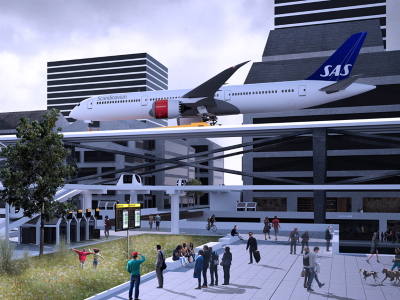 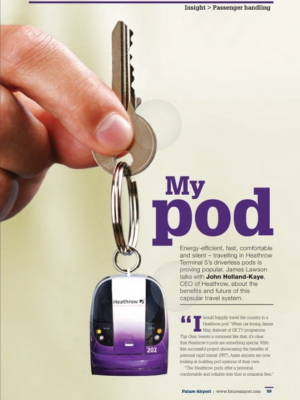 Chief Minister of Haryana (India) tells agency to "get cracking" on Gurgaon project after 3 year delay. 7-8-2014

Google expresses support for PRT. 4-9-2014
Mountain View Councilman Inks: PRT not dead yet; Google manager: "We need to have an eye towards PRT systems and self-driving cars that are coming closer to fruition in the U.S. every day."
'Pod car mayor' Kasperzak steers discussion toward existing systems; opponent says airport system like Ultra may not be aesthetically suitable.

Ultra's Richard Isles told the NewsCenter today that the Terminal 2 extension, which actually was to be a separate PRT system, was part of the 2014-19 capital plan submitted by Heathrow to both the airlines and the Civil Aviation Authority (CAA), the UK government regulator. CAA rejected the five year plan because it would increase costs to the airlines, which would be passed on to their customers. CAA told Heathrow to revise its costs downward, so cuts were made.

"The capital plan [has] been settled on and unfortunately it looks as though the second PRT system will not be included," Isles said. He said Ultra is exploring all-private funding for Terminal 2 pods.

In other Heathrow Pod news, Isles said the Terminal 5 Pod is now available for use by guests of The Thistle, a hotel near pod station B. Starting last fall, guests needing to go to Terminal 5 can do so for a £5 fare. About 1,000 Thistle guests are estimated to have used the pods so far.
Close Story


Huge Airport, Huge Savings (Heathrow). 2-25-2014
"Passengers consistently give the new transit mode high marks; not surprising given that the pods boast a 99 percent reliability rate, and keep passengers waiting no more 10 to 15 seconds. The pods also consume 70 percent less energy than it takes to power a car and 50 percent less than a bus."
'March of the pods: How design is going egg-shaped' 1-16-14
"Doubtful credibility": Amritsar PRT on 'backburner' as Dep Chief Minister cites doubts about Ultra Fairwood. 1-13-2014
Notes the Tribune: "Besides, the government seems to be in no mood to antagonise traders and other sections which are up in arms against the project ahead of the Lok Sabha poll [general election]."

Despite articles to the contrary (such as), the driverless pods planned for use in Milton Keynes are not by Ultra PRT. Our sources say 2-person EVs ("cars of the future") will be used. And they will be driven like a regular car, only becoming driverless if they prove successful and people get used to them being on the streets.

Punjab Newsline Network: Deputy Chief Minister's plan for Amritsar PRT called a 'non-starter' due to lack of will from the government, local administration and narrow approach by shopkeepers along the route; "may not be a reality even in the next a few years." 8-5-2013

In BBC 4 report Is Britain enjoying the wrong kind of growth? Ultra transit pods are held up as an example of the right kind. 7-25-2013

Professor Lowson founded personal rapid transit maker Advanced Transport Systems Ltd., later renamed Ultra Global, in 1995, after a distinguished career that included the Apollo space program, where he led a team of over 50 staff. He served as Director of Corporate Development for the helicopter maker Westland, responsible for marketing the EH101 in Canada and for establishing two systems companies. Mr. Lowson was Chief Scientist at Westland, where he established and led the Westland Technology Demonstrator program. This generated the advanced rotor system, for which he is a patentee, now used on both Lynx and EH101 helicopters.

He was the Sir George White Professor of aerospace engineering at Bristol University when he conceived and developed Ultra. On May 8, 2013, the second anniversary of the launch of Ultra's Heathrow Pod transit system, Professor Lowson commented, "It is extremely satisfying, and testimony to the dedicated work of the whole Ultra team, to reach one million miles, fully driverless and two years full passenger service. Most satisfying of all is that the pod continues to delight its users."

• Notice in The Times 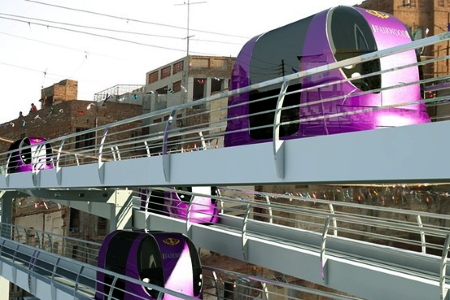