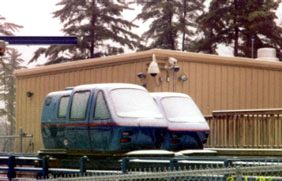 Photos from the Raytheon test track, 1996

More about what went wrong with the Raytheon version of PRT. From the Advanced Transit Association newsletter, Spring 2000 (requires Adobe Acrobat)

Lesson in Piling-On Policy Objectives. It was planned riders with wheelchairs would roll onto the pod and ride sideways, but activists for the disabled demanded wheelchairs had to be able to face forward. Raytheon acceded by making the pods longer, resulting in greater weight & cost, and therefore greater size, weight and cost of the guideway. This was one of several compromises that negated the system's intended cost and ease-of-construction advantage.

More photos of Rosemont station design (dead link; but looked more or less like this)

Raytheon PRT: Not quite dead yet

(Sources)-- The Raytheon PRT2000 test track has been torn down: True or False?

"Not true. It is up and, as far as I can see ther [sic] are no immediate plans to remove it. Raytheon had an urgent need to build a new (large) laboratory building at that complex and there was some discussion of removing the test track because where it is sited would be the logical place to build the new building. That idea was dismissed and the new building is nearing completion on the other side of the test track.

The track appears in perfect condition (the guidway and vehicles look as though they were just built). I have not heard of any operation in the last few months but, if there was some good reason, I think they could have it up and operating in a matter of hours or days.

There has been no change in Raytheon's plan to close out their PRT activity. It has no place in their planning. Originally, the plan was to have the technology developed, as it was, in one of the electronic engineering divisions and then to turn the whole business over to their large (25,000 employees or so) construction engineering divisions Raytheon Engineers and Constructors. But, because of bad management or bad luck or whatever, that division began to loose money (big overseas jobs underbid) and Raytheon finally sold the whole business to Morrison Knudson (now has a new name) for a trivial amount (like $500 million). MK subsequently went bankrupt and later sued Raytheon claiming that Raytheon did not reveal all the problems. That issue was settled. But --- with the sale of Raytheon Engineers and Constructors, Raytheon no longer had a structure into which the PRT business would fit. That whole story probably was an important factor in Raytheon's thinking when faced with the need (as I understand it) to invest more money in the Rosemont project.

Raytheon has an active effort underway to transfer its PRT assets to some other organization and, at present, is actively negotiating with a promising group. If an when they finally come to terms with someone, then the issue of the test track will be addressed."

The PRT community was abuzz on April 19, 2002 as word spread of a new YorkPRT web site showing pictures of Raytheon "PRT2000" vehicles and guideway. Had PRT2000 been sold?

Reports in the Seattle PRT newsgroup indicated that YorkPRT was the new incarnation of York Monorail, and that they had indeed purchased the Raytheon technology, including the control software. York Monorail dates to 1998, an exploratory effort to build a transit link between the city center of York UK and the suburban Monks Cross shopping mall. Apparently, a conventional monorail has been deemed unfeasible for undisclosed reasons.

The YorkPRT web page shows the blue-and-gray PRT2000 vehicles, on the test track at Raytheon's Marlborough, MA facility. However, YorkPRT's own Vehicle Data Sheet shows they are performing a redesign:

• Page 1: At first glance, the vehicle is less boxy, more streamlined.
• A closer look shows York is doing away with the cab-above, bogie-below design. The wheels are built into the passenger compartment, like an automobile.
• A long, flat, green rectangular box may indicate a linear induction motor-- a departure from Raytheon's through-the-wheels drive.
• Therefore, the YorkPRT will ride atop a flat, open, footbridge-like guideway. The guideway would have a reaction surface for the LIM.
• The characteristic Taxi 2000-based switch remains, mounted inside the vehicle's nose, the ends of the switcharms extending from the left and right sides like a moustache. This indicates that the guideway will have sidewalls or railings on which switch-rails will be mounted.
• Page 2: thumbnails of a number of Marlborough photos.

Hopefully, these redesigns will enable a system of lighter weight and lower cost than Raytheon's ill-fated system.

Descriptions of York Monorail in 1998 depicted it as a local steering committee, with the monorail-specialist consultant Carr-West providing technical expertise. Carr-West has an association with manufacturer Intamin AG, which would supply the monorail hardware. YorkPRT's acquisition and redesign of PRT2000 takes it out of the realm of policymaking group and into the realm of engineering and manufacturing-- a significant change in mission.

Available information about the York Monorail project described a corridor beginning near Cliffords Tower in the center of York, and proceeding northeast along the River Foss, down Heworth Green, Heworth Road, through 'Monks Stray', Huntington Stadium, and ending at Monks Cross shopping center. Total distance is about 2.5 miles. It remains to be seen how YorkPRT will expand this corridor to take advantage of PRT's network service. 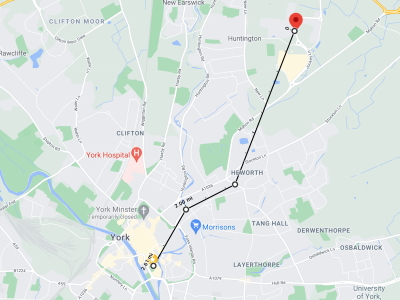