HeathrowAirport
The future has arrived at #Heathrow! Check out the new #heathrowpods that we're launching today: tinyurl.com/4y2busf
Thu 15 Sep 05:24


HeathrowAirport
@jordandias Yes, they have been in operation, but their official launch is today.
Thu 15 Sep 05:56

"Heathrow pods are an idea for the future": Christian Wolmar ("Britain's leading transport commentator") rides the pods at Terminal 5 and comes away impressed. "Certainly, it merits wider consideration than it has been given. In fact, the concept has attracted a surprising amount of criticism with whole websites devoted to deriding the very idea of individualised public transport." 5-7-2012

Amritsar debate: Four conservation/architecture experts say pod transit would impact views of Amritsar landmarks, 'heritage character'. 7-7-2012
Of course, this could be said about any modern rail transit technology.
• "Amritsar traders also against PRTS" 7-7-2012 Link
"A day after conservation and architecture experts aired their concern regarding the PRTS project in the holy city, the trading community at Hall Bazaar and nearby markets has also expressed apprehensions about the plan taking a toll on their businesses." Synopsis. Merchants in the project zone: 1. are concerned the PRT system will depress business like "The Sherawala Gate to Dharam Singh Market stretch," the route along an imposing viaduct to/from the Golden Temple (GT) parking garage; 2. claim Golden Temple pilgrims prefer to walk the 1 km from the train station to the GT; 3. worry about disruption by PRT construction and utilities relocation; 4. don't understand how PRT will use the "7-ft footpath [right of way] on either sides of the road"; 5. say utility relocation has prevented activation of new $1200 street lights; 6. worry the PRT will cause tourists not to come to the "heritage bazaars." One critic suggests a fleet of government-owned "battery-operated or CNG vehicles" and "multi-storey parking lots" around the city to reduce congestion.

UK Tram, a British rail industry group, has issued How To guidances on developing PRT projects 7-20-2012

Airport World magazine: 3 other airports interested in Heathrow pod transit. Schiphol, Arlanda, and one in US. 8-6-2012

BBC: Bristol considering locally-based Ultra for system in the Temple Quarter business area. 10-1-2012
• Pods idea dropped as too expensive, not done before in urban environment 3-20-2014

More honors: Ultra wins "Highly Commended" in the UK Project category at the Light Rail Awards, and "Most Innovative" category at the UK National Transport Awards. 10-14-2012

CITIES at The Atlantic: Would More Drivers Use Mass Transit if It Mimicked Private Cars? 1-15-2013
A fairly broad introduction to pods. PRT academic Wayne Cottrell is quoted.

According to Ultra's Adam Ruddle, the T2&3 pod system will be separate from that of Terminal 5 in that the guideways will not be connected, "though both systems will be operated from a single control centre as this only requires a high speed data link."

"There will be a second maintenance facility associated with the T2/3 system," Ruddle said.

He said the new PRT will run from the T2&3 parking lot (north of the runways) to the terminals (south of the runways) via tunnels. This is similar to what was studied years ago to serve the Central Terminal Area.

Pod users will be able to take elevators & escalators to Underground and Heathrow Express rail stations.

...As part of a consortium led by Quark of Brazil, a proposal for a public transport system for the Brazilian city of Florianopolis utilising Ultra PRT has been short listed for a final round of feasibility studies ahead of the award of a construction contract. With our partners, Ultra is now working on this major study which if selected would become the largest PRT system in the World." 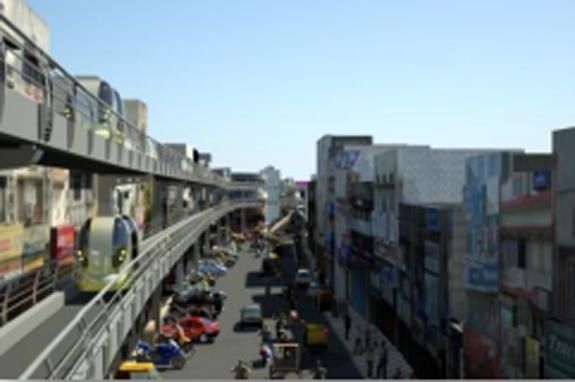